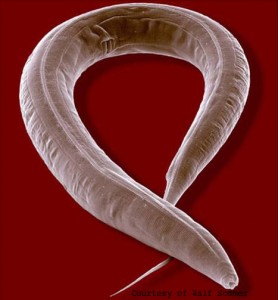 Since C. elegans starts to be used as a model organism more than 20.000 publications covering a wide range of topics in biology  were published and 5 Nobel Prizes involves C. elegans : S. Brenner, J. Sulston, R. Horvitz, M. Chalfie and CC Mello. This microorganism was once name: the “Nature’s gift to science” by Sydney Brenner who focus his research, in the early 60’s, into the area of neuronal development using this transparent nematode. In the middle 70’s he even followed studying on C. elegans but from the molecular and biology development point of view(1).

C. elegans gender is Caenorhabditis, it belongs to the family of the Rhabditidae. This roundworm formed of only 1000 cells and this was the reason why it was the first animal that had its genome completely sequenced back in 1998(2). This achievement leaded to follow the genome sequencing race that ended with the Human Genome Project(3). C. elegans wiring diagram or so-called “connectome” had been realized in 2012(4,5). This major advanced leads to a rapid debate inside the community : does a simplified model (neuronal connection network of C. elegans) can explain the behavior of a complex living organism?

This nematode is the best candidates for adaptation to environment with a noticeable consequence on its physiology: C. elegans lifespan is depending on the environment. (8)As mentioned by Frézal L back et al. in 2015 (6), C. elegans has been considered as a top model organism for research in biology for decades. C. elegans is very easy to grow it on a Petri dish and only two incubators are needed, one at 15°C and another one at 25°C. Then the growing time is very fast, around 56 hours(7) and it is possible to have multiple worms on a single Petri dish. 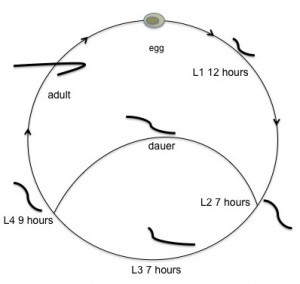 If the environment is not stable enough during the first two stages a “Dauer” additional developmental stage appears. (10) It is considered as a dormant phase where the worm can survive up to four months which is a drastic increase of their normal lifespan (around 3 weeks). This occurs due to two genes called daf-2 and daf-23(11) that with their expression they allow the normal growing cycle. When they are not presented the nematode turns to “Dauer” stage. Temperature has a major impact on C. elegans development. First of all the growth development is related to temperature because they are sensitive to it.(9) This transparent nematode has 4 larval stages that go from L1 to L4 and one mature or adult stage. The length of each cycle is temperature dependant. As an example if the embryos are grown at 15°C they will reach the mature stage in 6 days but if the temperature is increased by 10°C to 25°C, this time is reduced to more than the half, so they can become adult worms in 2.5 days. 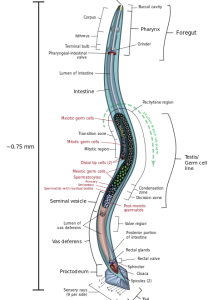 Figure 4, Image of the anatomy of C. elegans

If C. elegans is grown in a liquid environment at 16°C the lifespan is of 23 days. If the temperature is set to 25°C, the lifespan gets reduced to 9 days. This difference can only be explained by mentioning the role of clock genes (Clk). These are genes controlling the circadian rhythms, cycles of genes expression or behaviors that repeat more or less every 24 hours. Those cycles represent an internal clock that can be synchronized due to external stimulus that in the case of C. elegans are related with light/dark and temperature. (12,13)  The key here would be to understand the relationship between those clock genes and the capability of the temperature to control their expression. It has to be mentioned that the wild worms can adjust their own lifespan according to the surrounding temperature but the mutants lacking of the Clk gene cannot respond to it.

Although still possible with traditional techniques (random mutagenesis), it is now easier than ever to create thermo-sensitive nematodes thanks to the development of DNA engineering techniques such as TALEN or CRISPR/Cas9 (14),

A lot of temperature-sensitive C. elegans worms have been used to study the genes that act on the growth and development (15) This study shows ways to avoid the lethal effect of zygotic, maternal effects or sterile mutations. This research team identified 24 thermo-sensitive alles of a group of 13 genes. Some of them like the mex-1 mutation have direct effects on the embryo polarity development.

Temperature-sensitive mutants and wild type C. elegans are a great field of study in biology.

There are some neurologic diseases such as ALS, Parkinson or Huntington that have been studied in C. elegans.For ALS and Huntington temperature-sensitive mutant genes can work as modifiers for the misfolding of proteins and for toxicity aggregation. This gives the possibility to combine live-cell imaging with fast temperature shifts that go from permissive to restrictive temperatures. Thanks to fast temperature shift it is possible to watch GFP-tagged mutant protein aggregation. (16,17)

It is crucial to thermalize correctly when working with C. elegans and scientists used to incubate the worms at the target temperature. Incubation is good for long term experiments, we may wonder how to make fast temperature changes and live-cell imaging. How to create the best set up in term of temperature control with C. elegans to be able to published articles with the most accurate methods?

We designed  CherryTemp,  the world’s fastest heater-cooler for microscopy that allows you to make temperatures changes in the range of 5°C to 45°C in 10 seconds  and at the same time get microscope images. All the studies mentioned before could be done using CherryTemp because it allows both thermalization and live-cell imaging.

CherryTemp  is robust, stable and very easy to use, it fits within any microscope settings and we provide assistance to help you and individual meeting if needed.

GET A QUOTE OR TECHNICAL INFORMATION