Beyond the limits of light diffraction: super resolution microscopy

Overcoming the limit of light diffraction in microscopy

Light diffraction is a physical phenomenon that define the resolution limits in both optical and electron microscopy. This phenomenon has been discovered and characterized by Abbe in 1873; he found that the capability to resolve two points at a certain distance is related to the wavelength used to illuminate the object. In the last decade new light microscopy techniques based on signal processing and/or light beam manipulation have made possible to go beyond the limits of diffraction. 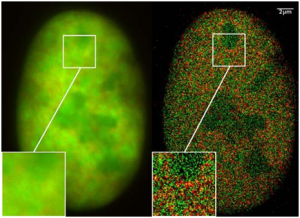 Comparison between a standard high resolution image (left) and super resolution (right) images. What appears like a homogeneous and blurry signal using standard fluorescence microscopy can be turned in a very detailed map of the signal when super resolution is used. Source: https://commons.wikimedia.org/wiki/File:GFP_Superresolution_Christoph_Cremer.JPG

Optical microscopy, also referred as light microscopy, is the oldest technique of microscopy. It is based on a light source of visible light to illuminate a sample, light passing trough the sample is then collected and magnified by a group of lenses (objective and ocular). The same principle is still used nowadays and is called bright field microscopy.  It is still a useful technique for routine analysis and fast screenings in life and material science.

The first basic optical/light microscopes were developed during the 17th century. Nowadays, several type of microscopy techniques have been developed in order to allows scientist to obtain different information of their specimens.

There are many factors that can affect the final resolution of an optical imaging system like a microscope but the most relevant and difficult to overcome is the diffraction limit of light given the fact that it is a physical law and does not depends on the quality of the lenses and the way the optics are arranged.

Back in 1873, the German physicist Ernst Abbe discovered how the resolving power of microscopes is limited by the diffraction of light. His research revealed that the resolution of a microscope is not related with the quality of the microscopy components themselves but due to the wavelength of the light used and the aperture of the optics setup.

Due to this phenomenon, a microscope is not able to resolve two objects if they are located to a distance that is shorter that λ/2NA, with λ being the wavelength of light used to illuminate the sample and NA the numerical aperture of the imaging lens. This implies that the diffraction happening at the sample level does not allow to differentiate between two objects divided by a lateral distance which is less than half of the wavelength of the light that has been used to image the sample [2-3].

Abbe discovered that images are made of an array of diffraction-limited spots with different intensities which overlap one to each other to produce the final image. While it is possible to increase the resolution by reducing the wavelengths (i.e. using UV light) or by increasing the numerical aperture it is not possible to go beyond a resolution of 200nm [4].

Nevertheless in the last decades advances in fluorescent microscopy, light source manipulation and image signal processing had led to the development of several microscopy techniques able to overcome the physical constrain of the Abbe law. Those new type of microscopes are known as Super Resolution microscopy [5]. 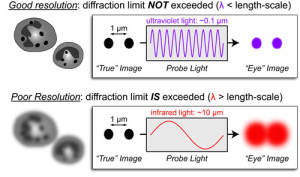 Figure 2: Explanation of the difference between good and poor resolution taking into account the Diffraction limit of light