Introduction to Diffraction Limit of Light

The optical microscopy, also called the light microscopy, is the oldest technique of microscopy which uses visible light and lenses to magnify images of very small samples. It is a standard technique frequently used within the fields of life and material science.

The first basic optical/light microscopes were developed during the 17th century. Nowadays, there are many variations available that enable high level resolutions and sample contrasts. Due to the computer-aided optical designing and automatic grinding methods, the quality of the images has improved exponentially with nearly no deviation [1].

However, optical microscopes still must overcome a critical limit in optical resolution caused by the diffraction of visible light wavefronts when they pass by a circular aperture at the rear focal plane of an objective, or lens.

Figure 1: Scheme of the diffraction limit

The diffraction limit in the super-resolution microscopy context

There are many factors that can affect the final resolution of an optical imaging system like a microscope but the most relevant one is the diffraction limit of light.

Back in 1873, a German physicist called Ernst Abbe discovered how microscopes had limitations due to the diffraction of light. His research revealed that the resolution of a microscope is not related with the quality of the microscopy components themselves but due to the wavelength of the light used and the aperture of the optics.

Due to this phenomenon, a microscope is not able to resolve two objects if they are located to a distance that is shorter that λ/2NA, with λ being the wavelength of light and NA the numerical aperture of the imaging lens. Which means that the diffraction limit of light does not allow the microscope to differentiate between two objects divided by a lateral distance which is less than half of the wavelength of the light that has been used to image the sample [2-3].

Abbe discovered that images are made of an array of diffraction-limited spots with modifiable intensities which overlap one to each other to produce the final image. There are some options to overlap those constrains and maximize the spatial resolution and the image contrast to reduce the size of the spots that are limited by diffraction of light. For instance, it is possible to reduce the imaging wavelength, increase the numerical aperture or use an imaging medium that has a large refractive index [4]. 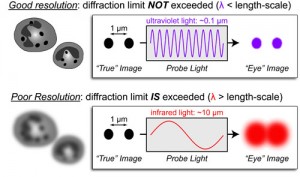 Figure 2: Scheme showing the difference between good and poor resolutions taking into account the diffraction limit of light

How to overcome the Diffraction Limit of Light?

Super-Resolution Structured Illumination microscopy increases by two the spatial resolution over wide-field microscopy. In 2D/3D-SIM, lateral and axial resolutions are improved by 100nm and 250nm respectively.

The use of conventional fluorophores is possible giving access to existing biological mutated cell lines.

Up to four different wavelength[1]  can be used with Structure Illumination microscopy making this technique very useful to co-localize or access to multiple highly-resolved information inside cells and organelles.

Finally, the sample preparation for SR-SIM observations is easier than other super-resolution techniques such as STED or STLM[2].

This super resolution microscopy technique is very sensitive to out-of-focus light and it is very hard to focus in samples that are thick or those which are densely labelled[3].

In addition, whereas PALM/STORM or STED techniques can reach a 20nm lateral diffraction limit, Structured-illumination microscopy is limited to 200nm[4].

Finally, some artefacts may be generated during the image reconstruction which can damage the quality of the image [5]. 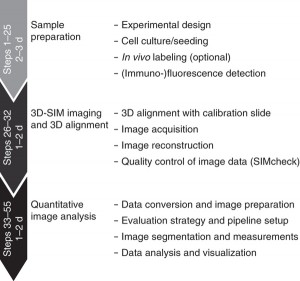 Figure 3: Scheme of the different steps before, during and after SR-SIM observations that includes the sample preparation, the observation and the reconstruction of images [5].

Pablo is part of the H2020-MSCA-ITN-ETN-DivIDE European network. LEARN MORE.