This scientific note focuses on mechanisms protecting MTs from depolymerization by cold. The biological significance of cold stability from an evolutionary point of view is also discussed. 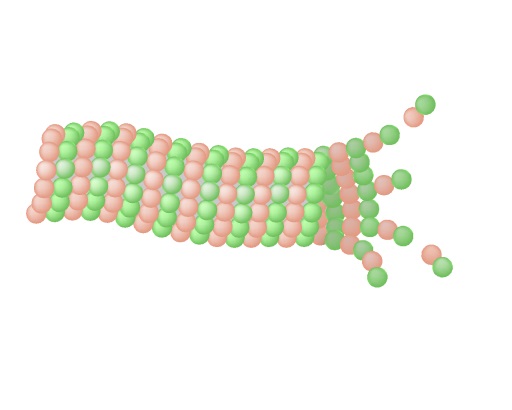 Microtubule dynamics at the plus end, with tubulin dimers depicted in green and pink.

In cultured Drosophila cell lines derived from muscle and from wing imaginal disc, most MT disassemble upon cold treatment, but some cold resistant MT clusters across the cytoplasm remain. Additionally, these clusters have the capacity to act as MTOCs (microtubule organizing centers, see more information in Scientific Note Microtubule dynamics), inducing nucleation of full interphase MT arrays upon shift to higher temperature. This led to the discovery of a new type of non-centrosome and cold-induced MTOCs [18]. Nucleation of microtubules after depolymerization has been investigated as well in the Drosophila embryo syncytium (link to Scientific note Drosophyla embryo), where depolymerization by cold is followed by nucleation from given subpopulation of microtubules at chromatin vicinity [19].

Some families of MAPs (Microtubule Associated Proteins: link scientific note Microtubule dynamics) have been identified as central players in microtubule stabilization which renders them resistant to cold treatment. Initial studies on MAPs and cold resistance were performed in poikilotherm and cold adapted species, where cold protecting mechanisms are essential. To address the question of what renders microtubules cold stable in these species, in vitro assays for tubulin polymerization with MAPs purified from antarctic fishes were performed.  At 0-5°C, addition of antarctic-fish MAPs to tubulin induced microtubule assembly. Bovine MAPs added to antarctic fish tubulin would still induce assembly at 2-5°C. On the contrary, antarctic MAPs added to bovine tubulin depolymerized at 0°C (while they were able to polymerize at 33°C). These studies led to the conclusion that antarctic fish MAPs don’t possess specific properties to stabilize microtubules at cold temperatures. Tubulin itself is resistant to cold depolymerization in cold adapted species through structural changes, mainly due to variations in amino acid composition [13,14,15]. Post-translational modifications of tubulin have been suggested to be responsible of the cold resistance properties (see below).

Nevertheless, further studies showed that MAPS can play a protecting role as well. Amongst the first MAPS identified with this property were the STOPs (Stable Tubule Only Proteins). They were initially found in the mammalian brain, associated to cold stable microtubules, in vivo and in vitro [9,10]. STOP proteins were later identified as a family of MAPS present in multiple tissues, from neurons to muscle, re-named as the MAP6 family. MAP6 are calmoduline regulated proteins, and this explains why cold resistant MT are sensitive to calmoduline. MAP6 proteins contain a domain which is responsible of cold resistance (Mc), while a second domain (Mn) is responsible of cold and nocodazole resistance [11].

One intriguing fact is how cold resistant microtubules are extended across the tree of life while the MAP6 family exists only in vertebrates, since identification of additional MAPs conferring resistance to cold was largely missing.  Dacheux et al. [11] identified SAXO proteins as MAP6-like proteins specific to cilia and cilia-like structures, present in ciliated and flagellated organisms (including non-vertebrate species like Trypanosoma). SAXO MAPs are as well present in cilia and cilia-like structures in mammalian cells, like the human FAM154A (hSAXO1) [12]. Primary cilia are present in most human cell types, while motile cilia are present in some specific cell types (like sperm or tracheal epithelium). The cytoskeleton structure in both type of cilia is essential for their function, and defects in microtubule function and stability can lead to disease.

The importance of PTM on microtubule stability is well known (see Scientific Microtubule dynamics and MAPs). The effect of PTM on cold-resistance of microtubules has been largely investigated. Phosphorylation of microtubule associated proteins was suggested to play a role on cold resistance [8]. Additionally, acetylated and polyglutamylated microtubules were shown to be more resistant to cold, despite longer exposures to cold still made them depolymerize [4]. On the contrary, tyrosination is a PTM linked to cold-labile microtubules. As an example, two populations of microtubules were identified in the auditory sensory epithelium of the gerbil in a cell-type specific manner: cold sensitive microtubules in sensory cells, with tyrosinated tubulin, and cold-resistant microtubules in supporting cells with different PTMs. In this sensory epithelium, cold-sensitivity is linked to PTMs and this is important for cell function related to hearing [5].

Microtubule cold-protection mechanisms exist in poikilotherm and cold adapted species. However, it remains an open question which is, in vertebrate (and other) species, the physiological role of cold-resistant microtubules. In endothermic species, MAP6 has been described as a potential temperature sensor with a role in sensing body temperature decrease.  A cold-resistant population of microtubules could help to maintain basal body functions under abnormal hypothermic conditions [17]. Mice lacking MAP6 show severe synaptic defects and abnormal behavior. This highlights the importance of microtubule stability for synaptic plasticity [16].

Examples of live imaging of microtubule depolymerization by cold using CherryTemp in different species can be found in: 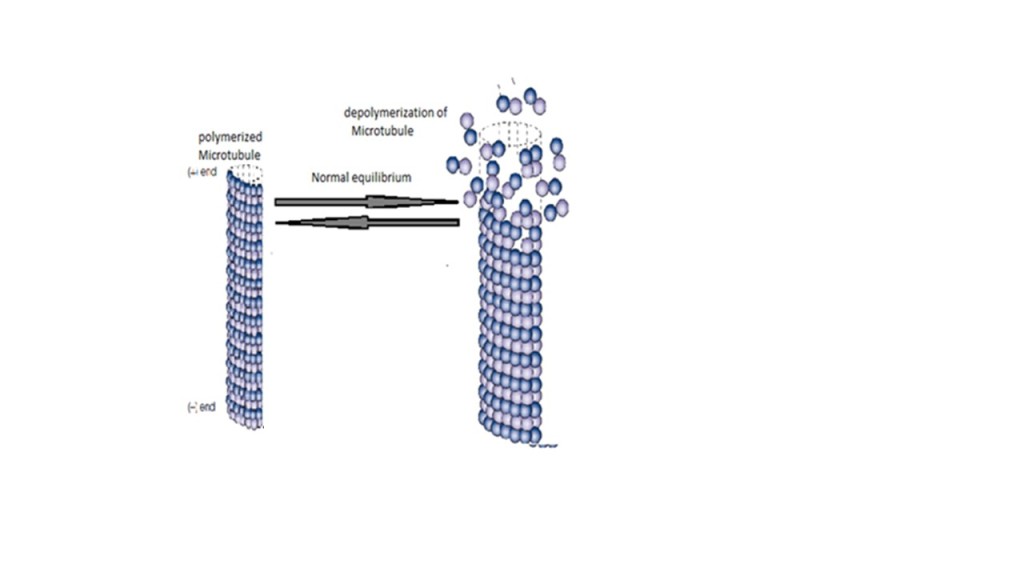