Liver on a chip state of the art

Why a liver on a chip?

The liver is part of the digestive tract, and the main organ involved in the metabolism of xenobiotics, thus in toxicological studies (either fundamental or during the drug development path), it is mandatory to test the chemical on the liver. Currently in use models are badly predictive of what is then observed in human. Liver toxicity is one of the major causes of arrest during clinical phases of the development of a new drug, with the so-called Drug-Induced Liver Injury (DILI). 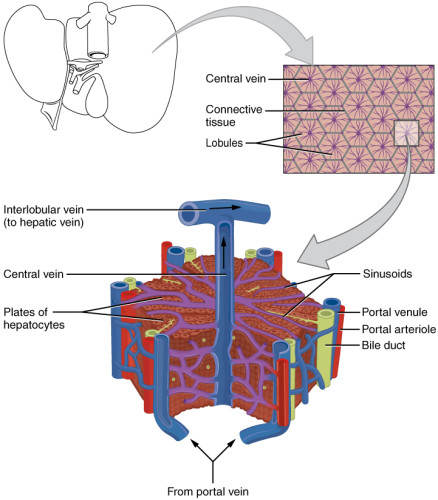 What has already been achieved in the organ on a chip liver field ?

The first model that might be closed to a liver on a chip is an assembly of micro-pillars in microwells (532 wells plate) with a 60nL capacity (1). Hepatic cells are suspended in a Matrigel and then placed on the micro-pillar. This model is compatible with high-throughput screening methods (HTS).

Regarding HTS methods, it is now possible to use micropatterning techniques (soft lithography) with co-cultured cell types in a 384 wells plate (Bhatia et al). The main issue remains the use of PDMS which absorb some drugs.

Jumping to liver on a chip, a team in Pittsburg University (Lansing & Vernetti) has developed a liver containing hepatocytes, endothelial cells, Kupfer cells and stellate cells (a) (2). Cells are coming from biopsy or of nonusable organ donation. This system is used for hepatotoxicity assessment (dead and bursting of cells) with the aim to better predict and prevent the occurrence of DILI. Emulate has developed a liver-on-chip containing several cell types. This chip is currently used by the FDA (b). The Healy lab has developed a liver on chip derived from iPS cells with 4 weeks viability (c).

BioMEMS has developed a microfluidic device aiming at mimicking hepatic sinusoids aiming at better prevent DILI. This device contains the same cell types than the Lansing’s one (3).

A collaborative project involving Columbia University, the MIT, Boston University and the Wyss Institut combined iPS differentiated in a 3D scaffold mimicking the environment of a hepatic lobule. This device is then coupled to a similar device containing heart cells or blood microvessels. The platform might be used to model diseases and during drug screening steps.

A team hosted in Harvard University (Khademhosseini et al) has bio printed a hepatic spheroid on a microfluidic device (4).

Columbia University and MIT are collaborating on a hepatic spheroid on a chip device as well.

Globally, 2 types of platforms are used: statics platform (without perfusion system) and platform with perfusion system. The last are used by Griffith et al (MIT), Toh and colleagues (they generate a concentration gradient of a given chemical). Hµrel company also developed a platform with a perfusion system on a mono-layer of hepatic cells to evaluate the elimination of a given pharmaceutical, then extended to be compatible with co-culture.

What’s next in the liver-on-a-chip field?

The main issue with “liver” organ on a chip is the bile ducts that have not been recreated yet. Once done, connected liver-on-a-chip with gut on a chip will give a more global vision about the way a chemical is washed out the body.

To go further simple liver-on-a-chip, scientists are developing PBPK (physiology based pharmacokinetic) approaches to model what could be the whole organism reaction.

Miniature liver on a chip could boost US food safety

Pierre is incubated in our Entrepreneurship school. LEARN MORE.