Our temperature controller allows you to precisely control the temperature of your host cells, or switch temperature from 5 to 45C in seconds and thermally control viral entry and transport inside the cells, take a tour!

Viral infection begins with the attachment of viral particles to the host cell membrane. This is a complex process during which viral capsid proteins bind to receptors at the cell membrane. These receptors can be proteins, carbohydrates or lipids. The viral particle is then internalized by endocytosis or by membrane fusion with the host cell. The mechanism of entry depends on the type of viruses namely enveloped or non enveloped viruses.

Non-enveloped viruses such as Influenza virus or vesicular stomatitis viruses enter the cell through endocytosis, using both clathrin dependent or clathrin independent pathways. Poliovirus, a non-enveloped virus, uses two alternatives strategies to enter the cell. The virus can be endocytosed :the hydrophobic part of the viral protein VP1 will insert inside the cell membrane of the endocytosed vesicles and form a pore to allow the penetration of the viral RNA. In the second strategy, the virus attaches to the cell membrane and directly releases its RNA material inside the cell.

Enveloped viruses, such as HIV, MLV or Ebola virus, enter the cells via membrane fusion. First, viruses dock to the cells; the binding of specific viral proteins to cell membrane receptors ensures the bridging of virus and host membranes. Subsequently both outer layer membranes of virus and host will fuse and the capsid or viral genome will be release inside the host cytoplasm. Since fusion is the first step towards cell infection, finding anti-fusion agents is a major area of research in pharmaceutics. An exhaustive lists of fusion proteins and entry mechanisms can be found the excellent principles of virology book (Flint et al., 2009). 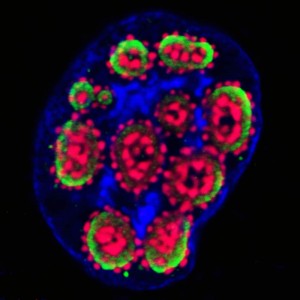 Key questions arise from studying viral entry : which viral and host proteins participate in viral entry ? What are the entry mechanisms ? What are the subsequent cytoplasmic transport mechanisms ? How to inhibit virus entry ?
Live-cell imaging allows to track single viral particle as it enters and traffic inside the host cell. The use of fluorescent proteins, fluorescent dyes such as amino-reactive dyes or lipophilic dyes enables the visualization of viral particles (Ayala-Nunez et al., 2011), however labeling can affect viral infectivity and the correct amount of dye has to be determined for each type of viruses-host studies. Viral entry into cells can be followed by fluorescently labeling the viral membrane, the viral content or the viral core (Hulme and Hope, 2014). If viral membrane is labeled, fusion events will consist of a disappearance of fluorescence, however if viral content is also labeled it will then be possible to follow the transport of viral particles inside the cell. 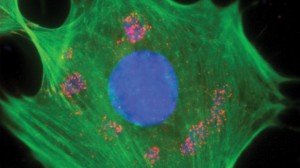 Viral entry into the cell is temperature dependent. In 2007, Brandenburg and colleagues used live cell imaging to precisely determine poliovirus entry mechanism into cells. By performing a series of experiments at 37C and 12C, they could determine that at 12C, poliovirus could no longer infect the cell, revealing that it was using endocytosis mechanism to penetrate. These types of experiments require a specific microscope setting with a thermally controlled environment to keep the cell warm during the manipulation. One caveat is the possibility to rapidly switch temperature to control both viral entry and viral transport inside the cells.
With our system, you can very precisely and very quickly change temperatures, it goes from 5C to 45C in seconds. You can trigger viral infection by switching from 4C to 37C, pause viral entry by switching in seconds to 12C, acquire high-resolution images and resume viral entry process. It is a plug and play system and fits on any microscope setting.