Asymmetric cell division occurs when one cell gives rise to two daughter cells with distinct cellular fate, function and, sometimes, different size. Asymmetric division is found in many organisms: from yeast, bacteria, fly to higher vertebrates. This process has been extensively studied, as it is fundamental to generate cell lineage diversity and specialized functions in multicellular organisms. Research on model organisms like C. elegans has contributed to the current understanding on how asymmetric division is regulated. 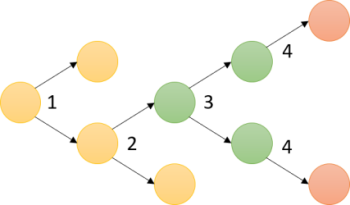 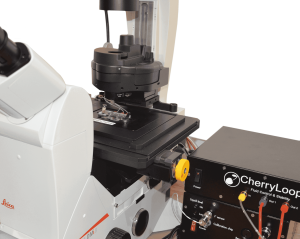 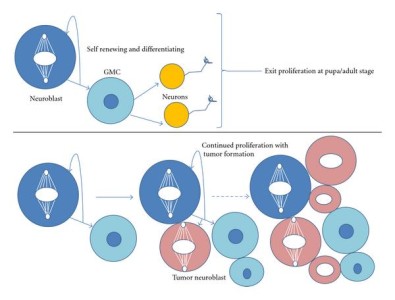 This process is central to mammalian development. Stem cells (like neural or epidermal progenitors) can divide asymmetrically, allowing for self-renewal and creation of a progeny of differentiated daughters. Importantly, the balance between asymmetric and symmetric stem cell division is required during injury and disease (Morrison and Kimble 2006).

The molecular mechanisms leading to asymmetric division have been deciphered in model organisms like the worm C. elegans and the fly D. melangaster (Gönczy 2008). Pioneer discoveries in Drosophila allowed to identify Numb as the first asymmetrically distributed cell fate determinant. One well studied example of asymmetric division during Drosophila development is brain development, with neurons in the larval stages generated from asymmetric division of neuroblasts, which divide in a stem-cell like manner (though self-renewal and cell fate determination, see figure). Another example is the generation of external sensory organs in Drosophila through asymmetric divisions from a single precursor cell SOP (sensory organ precursor). The following lecture from J. Knoblich (IMBA, Vienna) illustrates these examples in model organisms:

This scientific note will focus on the role of asymmetric division during worm development.

With its perfectly documented cell-lineage development, C. elegans is a model of choice to study asymmetric cell division. A succession of asymmetric divisions during the development of the worm ensures the establishment of the organism anterior/posterior, dorso/ventral and left/right axes.

In his review (Li, 2013), R.Li explains that there are three requirements for asymmetric division to take place: segregation of cell fate determinants (RNA transcripts, cell polarity proteins), chromosome repartition in the two daughter cells, and cell division itself. Before division, cell fate determinant factors are unequally localized to the cell poles of the mother cell, establishing cell polarization. Of the polarized poles will depend spindle orientation and the orientation of the cell plane division.  When cytokinesis occurs, cell determinants are inherited by only one of the two daughter cells, which will then adopt a distinct cellular fate from its mother.

The first cellular division in the worm embryo is asymmetric. In a very comprehensive review for the Wormbook (2005), Gönczy and Rose detail the cellular events leading to this first division. At fertilization, the sperm centrosome is pushed towards one side of the embryo, which will define the position of the first mitotic spindle and the division site. At the end of the first division, anterior/posterior axis of the embryo is organized. The symmetric embryo P0 is now partitioned into an anterior larger blastomere AB and a posterior smaller one (P1) (see figure). During the second division EMS and Abp define the ventral and dorsal side of the embryo, respectively. Finally, at the end of the third division, the left-right asymmetry is set up with ABal and ABpl.

The positioning of the sperm centrosome before the first division requires an interaction with the cell cortical acto-myosin network. This network is also critical for the positioning of PAR proteins. PAR proteins play a crucial role in the determination of cell polarity and C. elegans PAR mutants showed loss of anterior-posterior polarity along with defective cell fate destiny. Before the embryo first division, PAR proteins are equally distributed at the cell cortex. Hyman’s group showed that the repositioning of PAR proteins in the embryo is facilitated by flows of the cortical acto-myosin network (Goehring et al., 2011).  For an extensive review on cell polarity and asymmetric division see Cowan and Hyman, 2004.

The role of spindle positioning as a determinant of asymmetric cell division in the one-cell C. elegans embryo has been extensively studied by the Gönczy lab (https://gonczy-lab.epfl.ch/research/asymmetric_cell_division) and others.

The use of ts mutants requires shifting C. elegans from a permissive to a restrictive temperature, allowing for an inducible and reversible protein inactivation. CherryTemp is a temperature controller which allows to shift the temperature of entire worms in seconds, allowing for the observation of rapid downstream effects while live imaging the embryo. Increasing or decreasing the temperature at the sample in a very controlled manner allows to generate hypomorhic-controlled activity of temperature-sensitive proteins.