Bacteria can sense environmental changes and stresses and respond to them to maintain cell homeostasis. Heat shock proteins (Hsp)are key elements in the cellular response to stress. This scientific note will focus on Hsp70, an Hsp which is highly conserved across kingdoms.

Heat shock proteins (Hsp) were initially discovered as chaperones with a function in protein folding in response to stress. However, multiple functions in non-stress conditions have been described as well, like maintenance of protein conformation, regulation of intracellular protein localizationor avoidance of protein aggregation (Muga 2008). Different types of Hsp have been discovered, and they have been named according to their molecular weight. 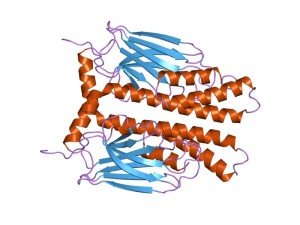 Schematic representation of the molecular structure of the Hsp70 protein

They require their functional partners, the co-chaperones J protein and nucleotide exchange folder-NEF protein. In bacteria, DnaK is the Hsp70 chaperone, with an important role in protein refolding after stress. It works with the partners GrpE (nucleotide exchange factor) and DnaJ (J protein) and contains andATPase N-terminal domain (Schroder 1993). Additional chaperone systems composed by homologues to these 3 proteins have been described (Yoshimune 2002). In eukaryotes, multiple genes code for Hsp70 proteins whose functions are well specialized beyond protein folding, and different co-chaperones are known as well, with different partners contributing to specialized functions (Zuiderweg 2017).

Among the abiotic stresses bacteria can face during their lifetime, temperature is an important one. Bacteria are adapted to grow and thrieve at a range of temperatures, triggering heat shock stress responses upon exposure to heat and cold. Thermal adaptation, however, allows bacteria to grow at non-optimal temperatures. This is possible because the components of the Hsp machinery work as thermal sensors, allowing from a switch in functiondepending on the temperature (Muga 2008). Furthermore, thermophile and cryophile bacteria areadapted to extreme temperatures (see the scientific note). Structural and functional studies of the Hsp70 (DnaK) in thermophile bacteria have shown how different structuralmodificationsare part of this thermal adaptation (Schlee 2002).

Given the important role of Hsp70 in protein and cell homeostasis, it is not surprising that these genes have been linked to multiple diseases, from cancer to neurodegenerative diseases. Indeed, a loss of function in the Hsp70 pathway leads to protein misfolding and protein aggregation, hallmarks of Alzheimer and Parkinson diseases. Therefore, the potential interest of targeting Hsp70 proteins for drug discoveryis enormous, rangingfrom anti-bacterial applications to human disease targeting(Patury 2009).

Heat Shock Proteins and HSP70: How to Increase and Decrease Them from SelfHacked