In this article, we will describe what a membrane is, and what it is used for.

A membrane is a semi-permeable barrier, used in microfluidic systems to control the transport of molecules and species in the system.
Different terms can be found instead of membrane in the litterature as the term of “filter”, “sieve”, or “porous support”. The term “filter” is used because the membrane allows the separation of particles of different sizes. The membrane can also be used as a shadow mask for the surface patterning. Besides, a membrane can also be used for the fabrication of 3D microfluidic devices, acting as a filter and able to interconnect two microfluidic channels above and below the membrane.

The membranes are used to control transport. When we transport particles out of the system, we can use the term of “separation”. When the transport is into the system, the term of “contacting” is employed. This transport is due to a chemical gradient: it can be a temperature gradient, a difference of pressure, concentration or even an electrical potential.

The morphology of the membrane is extremely important for transport: two kind of morphologies can be distinguished:
– a dense membrane
– a porous membrane

Dense membranes are used because they are permeable to single molecules. Wijmans and Backer established a model, calculating the permeability of the membrane, as the product of the diffusivity D and the solubility S in the membrane material.

As far as the porous membranes are concerned, the transport a different. It doesn’t occur in the material itself, but in the pores of the membrane. Thus, the transport is directly dependent on the surface and volume porosity, pore size distribution and the tortuosity.
The tortuosity is a parameter used to correct the deviation of pores shape from perfect cylinders. As well as the dense membranes, we also characterize the membrane capacity with the permeability P. The other factor is called the retention R, which varies between 0 (there is no retention of a component i) and 1 (the component i is retained).
Another parameter that characterizes a porous membrane is the MWCO coefficient. It is defined as the molecular weight at which 90% of a component is retained by the membrane, and this coefficient gives an indication of the pore size.

Furthermore, membranes can be used in two modes:
– the “dead end” mode: In this mode, the particles and feed stream are completely transported through the membrane.
– the “continuous mode”: In this mode, either particles are retained, they are called ‘retentate’ , either the feed stream passes the membrane and is called ‘permeate’.
Both modes can be reached, depending on the application.

Multiple ways for integrating membranes on microfluidic devices have been performed these past 15 years.

The first way would be the direct incorporation of membranes into the chip. This incorporation is done by either clamping or gluing the membrane on a layer or between two layers. In Fig 1 a clamping of two membranes is presented. As the simplest way to integrate a membrane in a microfluidic chip, the method also presents disadvantages: the fluids used (for instance inorganic substances) are combined with polymeric membranes and they can get sucked in between cover plates. The other problem is that when we glue the membrane, the glue can easily fill the pores of the membrane, thus blocking transport.
A method to overcome this problem is the use of micro stereo-lithography: a chip in 3D is prepared from a photo curable liquid polymer by using a UV beam. Thus, the membrane is put in a precursor solution, eliminating the need for a sealing step. Then, the non-crossed polymers are washed away after the chip preparation. Fig 1b shows the fabrication concept.

There are other ways to integrate a membrane into a microfluidic chip, such as the fabrication of a membrane in tisu, or the membrane preparation as part of a chip fabrication process, or a membrane made just with the chip material (for exemple, PDMS (polydimethylsiloxane) has been used as a membrane).
These methods will not be described in this article.

How to select a membrane?

There are multiple kinds of membranes used recently for biological applications (polypropylene, polyethersulfone, cellulose acetate, polycarbonate, PTFE, etc.). We shall first choose the best membrane material and type for our targeted application. Fig 2 is showing a scheme that can be used in the selection process. 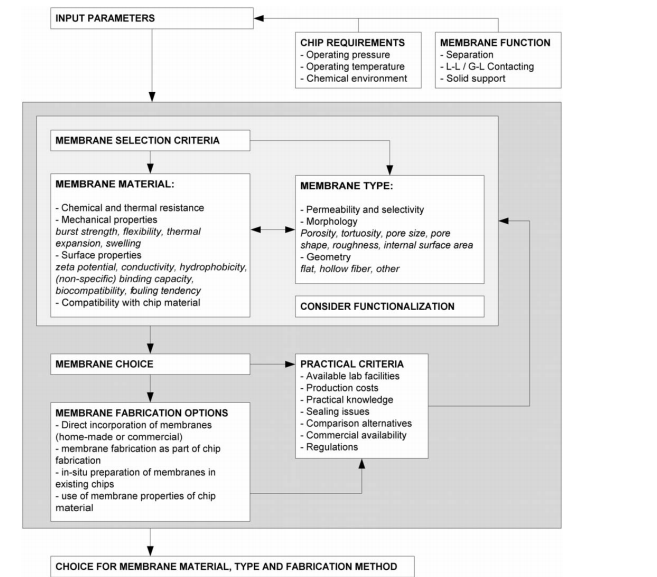