Simian Virus 40 belongs to thePolyomaviridaevirus family. It is a DNA virus which can infect different vertebrate species, with the capability of causing solid tumors. During SV40 viral infection, its replication is maintained by viral proteins together with the host replication machinery.

The SV40 T antigen has been widely used in biological research as an inducerof cell line immortalization and as well for the generation of transgenic mouse models of human cancers (Colvin 2014). Both methods have contributedto our current understanding of cancer biology. 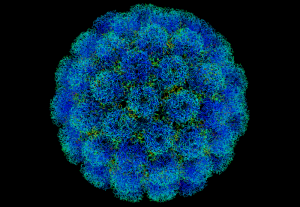 A temperature sensitive version of the SV40 large T antigen, the tsA58, has been used as a powerful tool for conditional cell line transformation. Transformed cell lines proliferate at the permissive temperature (33°C) but show proliferation arrest when shifted to restrictive temperature (39°C), upon T antigen inactivation (Jat and Sharp 1989).The use of ts mutants allowed for the initial understanding of the function ofthe T antigen protein in cell transformation (Brugge andButel 1975). Additional temperature-sensitive (t.s) mutations of SV40 large T antigen have been described (Ray 1992).

The use of temperature sensitive mutant proteins remains a widespread method for conditional inactivation of proteins in multiple model organisms and cell lines. Temperature shifts are efficient, easy to perform, and with minoroff-target effects as opposed to protein inactivation with chemicals.