Chemical gradients play a key role in many biological processes and regulate a number of cellular functions in vivo. Indeed, there are several examples of gradient-dependent phenomena in nature such as, for example, chemotaxis, i.e. the cell migration triggered by establishing a gradient. Moreover, chemical gradients have been shown to affect various cell behaviors, such as migration, proliferation, differentiation during development, wound healing, inflammation, and tumorgenesis. Therefore, it is evident that studying and possibly recreating these condition in vitro is crucial in life science related studies. In this regard, microfluidics, the science of engineering fluid streams at the micron scale, can provide the tools to recreate and even control, over space and time, these gradients. Furthermore, besides advantages like deterministic flow (i.e. low Reynolds number), reduced costs and ease of manufacturing, microfluidics allows the possibility to observe cell-related process at the same scale at which they take place. 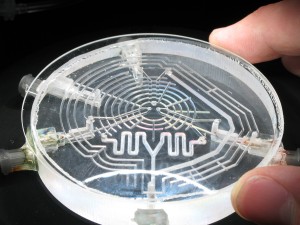 The two most common ways of creating chemical gradients in microfluidics are: (i) use of ad hoc designed microchannels in which adjacent streams containing different concentrations of the chemical of interest mix in order to generate the gradient, and (ii) use of the ability of cells to secrete and consume biochemicals in their vicinity combined with slow perfusion to create gradients in a direction parallel to the direction of fluid flow. Gradients development is a very active and fruitful application in microfluidics, and many more enhancements and developments in this field are to be expected. In the following, few relevant examples of microfluidic devices employed for gradient generation will be presented.

One of the most used technique to generate gradients in microfluidics is exploiting laminar flows. Although this method provides several advantages – among them simplicity of approach – it has one main drawback: the inevitable creation of convective flows. Convention can lead to artifacts, as it may not be experienced by cells in in vivo conditions, and more importantly may imply shear stress and related problems (e.g. removal of cell secretes, non isotropous migration, asymmetrical mass transport, etc…) to cells.

Atencia et al. (2009) overcome this problem designing what they have called a “microfluidic palette”. In particular, this device enables both to deliver soluble factors without shear stress and to generate controlled gradients with different spatial locations. The dynamic control of the generated gradients is achieved by decoupling convective flows from diffusion in the main chamber of the device. The striking point is that this is achieved without the means of any membrane or gel. In the following,  the principles underlying this device will be discussed.

Fig. 1 shows a schematic of a cross channel gradient generator; the T junctions at the end of the microchannel are the convection units. In order to decouple convection through the side channel from diffusion across the main channel, bulk flow rates through the inlet and the outlet have to be matched. Pretending that one convection unit is the carrier of a constant solute concentration while the other unit carries buffer, this allows to create a gradient across the microchannel which remains constant as long as the flows and concentrations of solute at each convection unit remain the same.

This basic principle is extended to a two-dimensional format in the microfluidic palette where several convection units revolve around a circular microchamber, each unit acting as a perfect sink or source of a given solute. In particular, in this device the afore-mentioned prerequisite of bulk flow matching is achieved by balancing the pressure between all access ports (Fig. 2). 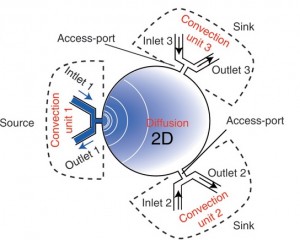 Moreover, in order to obtain stable gradients three main feature have been implemented in the design of the device. First of all, the main microfluidic chamber has been strengthen with a rigid substrate in order to avoid transient flows related to deformations. Furthermore, the outlets of the convection units have been merged through low resistance rigid channels on chip. Finally, a network of under-vacuum microchannels has been implemented in order to remove bubbles from the device.

More specifically, the device is made up by a main microfluidic chamber, where the gradient is developed, and a platform where three microchannels are used to deliver solutes using fluid flow at the three convection units. The microfluidic chamber is a glass cylinder (1.5 mm in diameter and 3-20 µm of thickness) with three radially distributed inlets which work as sources and sinks for the load and removal of solutes. The delivery platform is two-layered: one is made of PMMA whereas the other one is made of PDMS. The latter is used as a sealing gasket between the glass of the main microfluidic chamber and the PMMA layer. Furthermore, in the PMMA layer there is a network of channels which are not communicating with any other network of the device. These channels are used to purges bubbles from the main fluidic network by applying vacuum which generates a negative pressure on the PMMA/PDMS interface which binds the two layers as well. Sample loading is achieved using external syringe pumps with matched flow rate in order to avoid convection in the chamber. 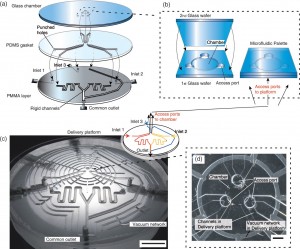 In conclusion, the microfluidic palette is a device which allows to develop via diffusion stable chemical gradients in its main microfluidic chamber. Furthermore, these gradients can be tuned in space and time with high precision by only varying the relative positions of the source and the sink. In fact, it is also possible to overlap several gradients inside the chamber. Finally, repeated measurements and experiments have proven the robustness and repeatability of the system over time.

Moving over, here will be briefly described a microfluidic gradient generator designed by Chang et al. (2014). This device is made of PDMS with a built-in PC membrane as a gas diffusion barrier. Chemical gradients are generated within the device using an arrangement  of serpentine channels. The main strength of this system lies on its simplicity of use and manufacture, plus it can be placed inside conventional cell incubators for optimized cell culture conditions. The device is made up of two PDMS layers: in the upper one is placed the chamber for chemical reaction whereas in the lower one there is the cell culture chamber where gradients are established. These two layers are divided by a PDMS membrane (100 µm) in order to prevent contamination of the cell environment by the reagent in the upper layer of the chip. Furthermore, an additional PC membrane is placed inside the upper PDMS layer in order to minimize gas diffusion. As been said, two inlets and a network of serpentine channels are used to develop chemical gradients inside the cell culture chamber, which can be tuned by editing the design and geometries of the channels. 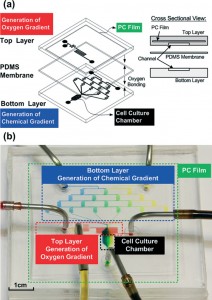 Due to its particular design, the chemical gradient is developed across the width of the cell culture chamber which means perpendicularly to the perfusion flow direction. Moreover, the creation of gradients was proven to be stable over time and repeatable thanks to optical observations with dyers and fluorescent media and comparison with simulation made with COMSOL software (Fig. 5). 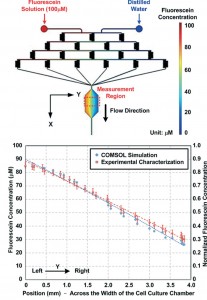 So far, the discussion regarded microfluidic devices that only allowed linear gradient development. However, concentration gradients across cell membranes and in other processes are not nonlinear. This is the case, for example, of breast cancer cells: indeed, while linear concentration gradient of the epidermal growth factor (EGF) showed to be ineffective, a nonlinear one succeed to induce chemotaxis. A crucial issue in generating nonlinear gradient profiles is being able to establish good spatial and temporal control over multicomponent laminar flows with different solute concentrations.

Selimovic et al. (2011) have developed  a microfluidic device capable of generating non linear gradients without the means of cumbersome external elements for control, such as pressure controllers. The device exploit two liquids containing different concentrations of various chemicals which are injected in a single microfluidic channel by the means of a standard syringe pump. Moreover, this microchannel branches off into several side channels which lead to an asymmetrical channel grid, which serves as a storage region. This grid works as a source for a matrix of 512 storage wells, which are arranged regularly along the branches (Fig. 6), so that the wells are filled with different mixtures of the two aqueous solutions. Therefore, if the ratio of the input flow rates is 1:1 inside the coflowchannel, and the first branch carries 25 % of the total flow, then the ratio of the two solutions after this branch will change to 1:2. However, the total flow rate along all flow paths from the input to the exit (i.e., along any branch) is constant, as the path length and, therefore, resistance is constant. More specifically, in the inlet or gradient generation region, the asymmetric channel geometry and the specific position of each branch combined with diffusion in the main channel lead to the formulation of a one-dimensional concentration gradient in the side branches. 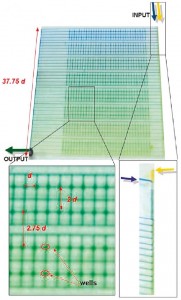 The system itself is a two layer PDMS microfluidic device with two input channel for the loading of the solutions to be mixed. Subsequently, the compounds coflow in a main fluidic channel (200 µm of width and 15 µm of height) before entering the channel grid in order to feed the 512 storage wells (200 µm of height and 150 µm of radius). Finally, is interesting to underline that the system is provided of several short (1 d = 800 µm), perpendicular channels which connect passively, i.e. they do not contribute to the gradient generation, the wells. These channels will be employed as a part of the perfusion system in the feature upgrades of the device in order to allow long-term cell culture.

Fig. 7 shows the experimental characterization of the gradients generated by the means of this device (left) in comparison with simulated data obtained with COMSOL software. Performance of the device in terms of stability and control have proven to be consistent even if a shallow concentration gradient normal to the main flow channel due to the short channels mentioned before was observed. Furthermore, the increment of the flow rate consistently increased the slop of the exponential curve which fit the gradient profile. The reason of that lies on the mixing mechanism, i.e. diffusion; indeed, at higher flow rate the two streams do not have the time to mix properly before the flow branched off into the side channels.

Due to its relevance in several biological processes, generation and control of stable gradients is a crucial challenge in nowadays life-science investigation. Microfluidics can be the platform of election for such a goal, as it provides both high controllability and ease of manufacturing. Indeed, several alternatives have been provided over the recent years in order to develop gradients by the means of microfluidic devices. These, have proven to be able to recreate in vivo conditions with stable and yet complex gradient profiles. Furthermore, reliable control over space and time has been achieved within the framework of a single, hence small-sized, device. In conclusion, gradient generation via microfluidics is a growing and promising area of research which aims to provide researcher the tools to investigate at a cellular level all those gradient-driven mechanisms which are at the basis of many important processes in nature.