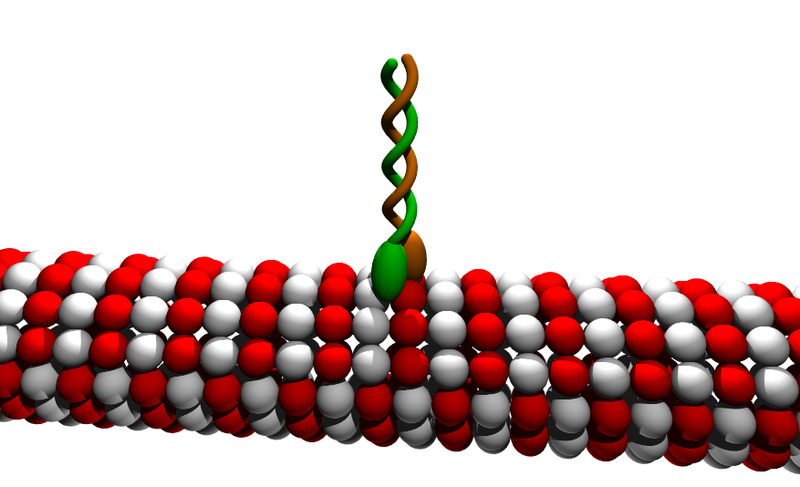 Microtubules (MT) are polymers on an equilibrium state with their subunit elements, α and β -tubulin, which form dimers and are the building blocks of microtubules. Microtubule polymerization is a regulated process and has a direction:  growth occurs towards the plus end of the microtubule. Microtubule polymerization requires energy through a GTP-hydrolysis dependent manner). Dynamics for microtubule assembly and disassembly are central to their cellular function in mitosis, cytokinesis, cell motility, and many other essential processes.

Microtubules are nucleated from tubulin subunits at specific subcellular locations, mainly the centrosomes or MTOCs (microtubule organizing centers). In Fungi the MTOCs are known as the Spindle Pole Body (SPB), with equivalent function to the centrosome of higher eukaryotes. Centrosomes are composed by a pair of centrioles, comprised of 9 microtubules organized in cylinders, surrounded by a dense pericentriolar material (PCM), associated to a high density of tubulin. Biogenesis and evolutionary conserved function of centrosomes has been reviewed in Bettencourt -Dias M. and Glover DM. 2007 [1].

Centrosomes lacking centrioles exist in nature (for example in some plants and fungi), and cell division without centrosomes exist as well. In these cells, alternative microtubule nucleation centers are generated, in a nucleation independent-of-centrosomes process from non-centrosomal microtubule arrays [2]. While spindle formation can occur without centrosomes, faithful chromosome segregation is compromised and mitotic defects have been described linked to this lack of centrosomes [1].

Minus ends of microtubules are located at MTOCs and nucleating centers, while microtubules grow from these centers through their plus ends.

Upon nucleation, microtubules are stabilized by association of Microtubule Associated Proteins (MAPs). These are mostly structural proteins which bind to microtubule. MAPs have been isolated and identified from in vitro purified microtubules in multiple tissues and species. Besides their important structural function, MAPs also play a role in the interactions of microtubules with other elements in the cell, like vesicles, in processes like cellular transport [3,4]

Microtubule dynamics are highly regulated at their plus-end, where growth and shrinkage (known respectively as rescue and catastrophe) occur. These are actively regulated process which respond to signaling and external cues. Plus-end binding factors have been largely studied [5]. EB1 is a key regulator of microtubule plus end growth, through direct binding to the plus end part of microtubules and through recruitment of additional regulatory factors. Signaling mechanisms are important for the plus end regulation. For instance, in Drosophila, Tao-1 was identified as a microtubule associated kinase with a role in plus end destabilization, which is important for contacts with the actin cortex and cell shape [6].

Additional factors, like cellular concentrations of calcium, drugs known for their properties as microtubule-assembly inhibiting drugs (podophyllotoxin, colchicine and nocodazole), and temperature are also important for microtubule dynamics. While in vitro association of MAPs and tubulin is stable up to 100°C (Ref. Vallee 1985), cold temperatures can induce microtubule depolymerization. See the following Scientific Note for more information on the effect of cold temperature on MT dynamics. 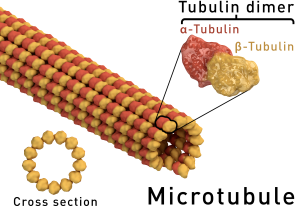 Microtubule structure composed of dimers of a and b tubulin.